Mending Nets and Getting Out of Boats 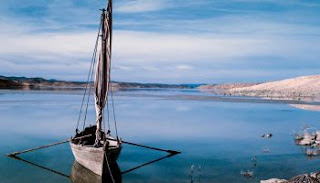 Year B Epiphany 3 Mark 1:14-20 (Sermon during the Holy Eucharist celebrated prior to the Annual Meeting at St. Thomas Episcopal Church, Sioux City, Iowa)
Today following the service, as you know, is our annual meeting, when we will think about, talk about, and pray about what God is doing here at St. Thomas, and how we are called to respond to what God is doing.


What does it mean to get out of the boat?  To stop mending the nets and follow Jesus?
Like a lot of other people these days, I probably spend too much time on social media – meaning Facebook, Twitter, and the like. But once in awhile, God seems to break through all of the noise on social media and hit me on the side of the head, and I was reminded of what following Jesus really means.


On Friday, I got a notice from Twitter that it was my 6 year anniversary of joining that social media site. I started with a personal account,  @RevJayDenne, where I make random observations, usually on spiritual or church matters, and @Virtual_Abbey, which was an already existing account I took over a few years later where I tweet prayers.
You might have heard of Twitter but don’t know how it works - it is a social networking site kind of like Facebook, except you are much more limited with what you can say - you can only post short messages for others to see, and those short messages are called tweets.


When you’re on twitter, you have to be brief.  Up until a few months ago, each tweet can be no longer than 140 characters – not words, mind you, but characters, meaning letters, spaces, or symbols.  That limit was recently increased to 280 characters, which still isn’t a whole lot.
So I’m always on the lookout for short, pithy sayings or prayers which can effectively be said in a tweet or two.  That notification of my 6 year anniversary on Twitter led me to look back to my very first tweets were back then, and I found one that I think is a pretty good summary of what it means to stop mending the nets and get out of the boat to follow Jesus.


It was quote from Dietrich Bonhoeffer, the pastor and theologian from Germany I’ve talked about before, who was executed at the end of World War 2 because of his resistance to the Nazis. The quote goes like this:  “When Christ calls us to come and follow, he bids us to come and die.”
Those words became true for him in a literal sense, but when he wrote those words in his book “The Cost of Discipleship”, he was speaking about our baptismal calling to pick up our cross, and follow Christ.  Our old life dies, metaphorically speaking, and in its place, there is new life with Christ.


The events of today’s Gospel lesson occurred about 1,900 years before the time of Bonhoeffer, and just as he was a Christian during a dark time in Germany, it was a dark time for the people of Israel due to oppression from the Roman Empire and its local puppet regime – the regime of King Herod.
The Jesus movement, to use the phrase from our Presiding Bishop, was just starting. John the Baptist had just been thrown into prison by King Herod.


Did that oppression cause Jesus to keep quiet?  No.  Today’s Gospel lets us know that he went around region of Galilee with a message that could be summed up in a single tweet: “the time is fulfilled, and the kingdom of God has come near, repent, and believe in the good news.”
In typically brief, Twitter-like fashion, Mark’s Gospel tells us how Jesus called Simon Peter and his brother Andrew, as well as James and his brother John.  Jesus’ call to both sets of brothers was the same- they were fishermen who were casting a net into the sea.  Along came Jesus, who said “Follow me, and I will make you fish for people.”

And does the Gospel of Mark tell us that they took awhile to think about this invitation from Jesus, talk it over with their friends and family, and then pack up their belongings?


The Bible doesn’t tell us what ultimately happened to these for fishermen who became disciples - Simon Peter, Andrew, James and John.  But the tradition of the Church tells us that three of the four of them paid the same price that Bonhoeffer did 1,900 years later.
Simon Peter was executed in Rome during the persecution of Christians by the Emperor Nero about 30 years after the death, resurrection and ascension of Jesus.  He was crucified upside down because he did not think he was worthy to be executed in the exact same way as Jesus.


Andrew and James met a similar fate.  Andrew was executed in Greece.  James was beheaded during a later persecution by King Herod.  All of the rest of the disciples were also killed for their faith, except the final one were heard about today – John survived the persecutions, although the traditional belief is that he was banished to the remote island of Patmos.
Our circumstances are vastly different than those of Simon Peter, Andrew, James, and John.  For one, although in some parts of the world, people are martyred for their faith – think about those Coptic Christians from Egypt on Palm Sunday last year when their church was bombed – we didn’t face any imminent danger just for coming to church this morning.


And, as I alluded to at the beginning of this sermon when I talked about Twitter, the way of proclaiming the good news, and the way of living out our faith, is much, much different these days.  When Jesus said “follow me, and I will make you fish for people” there was no way to spread the Gospel except through word of mouth, or sending letters as Paul did a few years later.  Now, I can hit “enter” on a prayer Tweet, and it can be read instantaneously around the globe, which actually is confusing for some folks when I tweet Morning Prayer, and it is 2 o’clock in the afternoon where they live.
But the call to us from Jesus is the same.  Follow me.  And, the task given to us by Jesus is the same.  I will make you fish for people.


To do that, mending the nets won’t do.  We have to get out of the boat.  Come and die with me, Jesus says.  Die to that part of your selves which fights against Christ – that gives in to the motivations of the world around us that promote arrogance, greed, and self-interest.
We have been given new lives in Christ – lives that are marked by humility and not arrogance; charity instead of greed, and service to others instead of self-interest.  We won’t be perfect, of course.  But as we heard from Psalm 62, God’s love is steadfast.  God alone is our rock, our fortress, our refuge, our salvation.  Our daily deliverance when we fall back into arrogance, greed, and self-interest comes from God – the God who our souls wait for in silence.  In hope.


Toward the end of my report which you’ll find in your annual meeting packet, you’ll find a list of questions that I wrote for us to think about and pray about.  When you ask those questions in the context of today’s Gospel, that might sound like this:


Fortunately for us, its not up to us to come up with the inner strength and fortitude to stop mending our nets and get out of the boat. Christ has already called us out of the boat and God has already made a covenant with you to help you live that new life in Christ - the covenant made at your baptism. The covenant where we are united with Christ in his death and resurrection – we die, as Bonhoeffer said, but we also live.  And that covenant life in our Prayer Book at page 304, so let’s pray the baptismal covenant together: