Sermon for the First Sunday of Advent - The Doorkeeper

First Sunday of Advent Year B Mark 13:24-37
Keep awake, for you do not know when the master of the house will come.


Those words from Jesus in today’s Gospel help give some focus to this season in the life of the Church we call Advent.  Advent is not just a name for the 4 weeks before Christmas in the church where we get a head start on our Christmas celebration.  We look back, yes, at how Christ came into the world, but it is also a time to look at how Christ comes to us now, and how Christ will come again at that time when God’s promises are fulfilled, and the Kingdom of heaven is made complete.  In these times – in between the manger of Bethlehem and the time when Christ will come again, Jesus tells us to keep awake.


Jesus tells us that the task of keeping awake falls on the doorkeeper.  Because we do now know when the time will come, someone has to be on the lookout.  In verse 34 of today’s Gospel, Jesus says that this situation is like a man going on a journey, when he leaves home and puts his servants in charge, each with his work, and commands the doorkeeper to be on the watch.


We often think of door keepers as being like guards, keeping people out.  The only way to get in is to talk your way in, let them know the secret password, sneak past them, or fight your through them.  But some door keepers have another role, not related to guarding something in order to keep unwanted people out.  The role of this other kind of door keeper is to let others know when something, or someone, is coming.


For example, there are those kinds of door keepers when a court is in session. Sometimes, that kind of door keeper may make a simple announcement, such as “All rise, court is now in session”.  Sometimes, it could be a more detailed and solemn ritual.  The second highest courts in our nation, just below the U.S. Supreme Court, are the several federal circuit courts of appeal, spread throughout the country.  On several occasions, I argued cases before the Eighth Circuit Court of Appeals, with court houses in St. Louis and St. Paul, where the door keeper would begin each session with this little ritual:


The lawyers and onlookers would all be gathered in the courtroom, waiting, when there would be three loud knocks at the door between the judge’s chambers and the court room. The door keeper would then announce: "Hear ye, hear ye, hear ye. The United States Court of Appeals for the Eighth Circuit is now in session.  All persons having business before this Honorable Court may now draw near and they will be heard. God save the United States and this Honorable Court.”

When will that master of the house return? When will that door keeper need to be alert and awake in order to announce that return? We don’t know. As Jesus said,  it may be in the evening, or at midnight, or at cockcrow, meaning that predawn time of the early morning, or at dawn.


Those times aren’t just random times that Jesus picked out.  They would prove to be crucial times of day in the days to come from him, particularly as the story of Jesus last few days are laid out in the Gospel of Mark.   Those times when Jesus says that the master may return are all connected with critical events leading up to the crucifixion. Evening, midnight, cockcrow, dawn. (Thanks to Pastor David Lose for writing about these connections)


The verses from today’s Gospel come from at the end of chapter 13 of Mark’s Gospel.  What happens in the very next chapter - chapter 14? Well, we have the Last Supper, and Mark 14:17 begins to tell the story of that event by saying: “When it was evening he came with the twelve…”.  Evening.


A few verses later, we have Jesus’ prayer in anguish – “Abba, Father, for you all things are possible, remove this cup from me, but not what I want, but what you want” .  When he had finished his prayer Mark’s Gospel tells us that  “Once more he came and found the disciples sleeping, for their eyes were heavy” because it was the middle of the night.  Midnight.


Jesus was then captured and tried before the religious leaders at night.  At the close of his trial, Peter’s abandoned Jesus, just as Jesus predicted he would.  When did that happen? Peter denied Jesus just as the cock crowed for the second time”.  Cockcrow.


And finally, we have the time when Jesus is delivered to Pilate, the Roman governor. When did that happen? According to the first verse of Mark chapter 15: “As soon as it was morning”.  Dawn.


Evening. Midnight.  Cockcrow. Dawn.  Each time was a critical time during Jesus’ road to the cross.  Each time is a time when Jesus said that we would need to keep awake, and keep alert, for the time when he would return.


Because the door keeper isn’t just one person.  The door keeper – the one given the task of keeping awake – keeping alert – for the coming of Christ - is us.


Our modern world is full of what I’ll call “do it yourself religion”, meaning the idea that our relationship with God is better as a strictly vertical relationship (just me and God), without a horizontal relationship (with each other).  I understand the reason behind that kind of thinking. Church communities are full of people, and people fight.  People are self-centered. People can disappoint us – even betray us.


People certainly did all those things to Jesus during the evening, at midnight, at cockcrow, at dawn.


His followers disappointed him by not staying awake while he was in anguish in the garden, and when Peter denied him.  One of his followers outright betrayed him. After the disappointment, after the betrayal, his own people crucified him.


But Jesus did not abandon them. After the resurrection, after his ascension into heaven, Jesus remained a living presence with them, in their community – helping them keep awake, keep alert, together.  Think of the words Paul used in today’s reading from 1st Corinthians – his letter talks about the spiritual gifts God gives to us that we need in order to wait for the revealing of Christ.


Was his letter to an individual? No.  It was to the church in Corinth.  From the rest of the letter, we know it was a church full of problems and divisions.  But they needed to stick together.  Together, they were called into the fellowship of God through Jesus Christ. Despite their problems – they still needed one another.


And that is the truth for us as well.  Despite our imperfections, together we are being molded by God, to use that phrase from today’s reading from Isaiah about how God is the potter and we are the clay – together we are being shaped into the body of Christ during these times in between the manger and the second coming.


We need one other, to hold one each other accountable when needed, to do together what Christ calls us to do – love and serve our neighbor – and, to be the door keeper to the kingdom of heaven.  Again, not the kind of door keeper who is a guard. 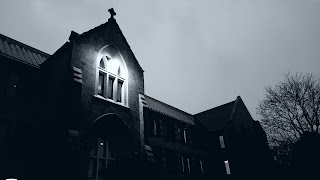