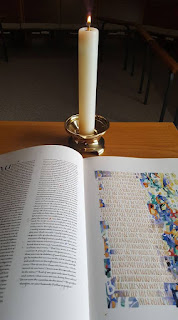 Today, Super Bowl Sunday, is a big day for American culture, but I want to look ahead to some upcoming dates on our calendar. We are only 10 days away from the start of Lent, with Ash Wednesday being on February 14.  Valentine’s Day.  Unlike Valentine’s Day,  Ash Wednesday isn’t exactly a big seller for Hallmark cards.  “Remember that you are dust, and to dust you shall return” just doesn’t go over as well as red hearts and flowers.


Anyway, between Valentine’s Day and April Fools day this year is the season of Lent, a time of preparation for Holy Week, when we enter into the mystery of Christ’s death and resurrection.  One way to observe Lent - one personal spiritual discipline you can adopt - is to go deeper into the Bible


As some of you may remember, I am an advocate for immersing ourselves into the Bible through a method of praying the Scriptures known as lectio divina – Latin for “divine reading” – where we read a short passage from the Bible several times and let those words sink into us to see how the Holy Spirit speaks to us in our life through those words.


There is another method of going deeper into the Bible that comes from the Ignatian Christian tradition, meaning from St. Ignatius of Loyola, who was the founder of the Jesuit order (the ones who founded places of higher learning like Creighton University).


A Jesuit named Kevin O’Brien wrote about how  “Ignatius was convinced that God can speak to us as surely through our imagination as through our thoughts and memories. (That kind of contemplation of the Bible) is a very active way of praying that engages the mind and heart and stirs up thoughts and emotions.”


“Ignatian contemplation is suited especially for the Gospels…. we accompany Jesus through his life by imagining scenes from the Gospel stories. Let the events of Jesus’ life be present to you right now. Visualize the event as if you were making a movie. Pay attention to the details: sights, sounds, tastes, smells, and feelings of the event. Lose yourself in the story…. place yourself in the scene…


Contemplating a Gospel scene is not simply remembering it or going back in time. Through the act of contemplation, the Holy Spirit (that dwells in you) makes present a mystery of Jesus’ life in a way that is meaningful for you now. Use your imagination to dig deeper into the story so that God may communicate with you in a personal.. way.”


Today’s Gospel reading is only 11 verses long, but there are a lot of people involved in this story, and so there a lot of different perspectives from which we can enter into this story.


Let’s start with Simon and his companions – his brother Andrew, plus James, and John.  Later on of course, Simon would become Peter, a leader of the disciples, and the rest would become known as one of the 12 disciples.


But for now, they were just ordinary fishermen who had just been called by Jesus to get out of the boat to follow him. (that story was only about 10 verses before the one we heard today).


Today’s Gospel began with Jesus being led to the house of Simon’s mother-in-law, who was very ill.  After Simon’s mother-in-law was healed, Jesus proceeded to heal many more throughout the night, but then he mysteriously disappeared.  Many people were apparently still looking for Jesus, trying to get Simon and the others to take them to him.  So, they hunted for him, and when they finally found him, they said “Everyone is searching for you”.  But instead of taking them back to where they had come from, Jesus led them to other towns, proclaiming the Gospel to other people.


So, one way you can enter into this story is by empathizing with Simon at the beginning of this Gospel, someone with a family member who is very ill and needs healing. Or perhaps you can see yourself in the position of Simon, Andrew, James, and John, as they were hunting for Jesus after he had healed many of the sick but then disappeared. Where are you Jesus?


Or perhaps you can put yourself in their position when they found Jesus. They thought they would be going back home, so Jesus could help the rest of the people there.  But instead, Jesus said he was going to take them on to other towns, and they did just that – traveling all around the region of Galilee, proclaiming the message in synagogues and casting out demons.  What ventures does Jesus have waiting for you that call you to go outside of your comfort zone, and move on to other things that might be exciting, but also risky.


Next, let’s think about the story from the perspective of Simon’s mother-in-law, who had a fever.  We’re taking fevers a little more seriously these days because of the flu epidemic, but most of the time, when we think of someone with a fever, we tell ourselves, its no big deal, just take some Advil or Tylenol and lie in bed for a day or two and everything will probably be fine.


2,000 years ago, of course, nothing even close to modern medicine existed, so a fever could become deadly in a short period of time.  So, her situation as she was lying down in the house was a pretty serious one.


Jesus took her by the hand, lifted her up, and the fever left her.  Notice that Jesus didn’t say anything to perform the healing. His touch, his presence, was enough. So one way to enter into this story through her perspective is to remember that about Jesus’ presence when you are going through a tough time, and you ask God for a sign, but you don’t seem to be getting a response.  You just can’t figure out what Jesus is trying to say to you.  But that does not mean that Jesus is not there, lifting you up in ways that you may not realize.


After the healing, did she take it easy and rest for awhile? No. After Jesus lifted her up, she began to serve them.  Mark’s Gospel doesn’t tell us why she did that.  Was there a sense of obligation that she had to do it because of cultural norms and expectations?  There’s no doubt those kinds of roles and expectations were placed on women at that time.


There is a word in Mark’s Gospel that gives us a clue that what she did transcended any cultural obligations imposed on her though.  I’m no Greek expert, but it is my understanding that what she did was an act of diakoneo – the Greek word used later in Mark’s Gospel to describe what the angels did to help Jesus when he was out in the desert for 40 days, and later on in the New Testament to describe what deacons do – serving God through acts of loving service to others.


So, another way to enter into the world of this story is to remember that when you are do an act of service for another out of love, no matter how great or small, you are continuing that ministry of Jesus that goes back all the way to this woman who, although she is not named in Mark’s Gospel, gives us a powerful witness.


And finally, you can immerse yourself into this story from the perspective of Jesus. The historic belief of the Church is that Jesus was at once both fully divine (as the incarnation of the Son of God, the second person of the Holy Trinity, Father, Son and Holy Spirit) and fully human.  Jesus of Nazareth was a real human being who experienced what we experience.  And so, while we cannot even fathom the divine perspective, we can enter into the story through his human perspective.


In particular, we can sympathize with how even Jesus needed to have some time alone in silence.  After those healings, he slipped away under the cover of the early morning darkness to be by himself for awhile. Away from all the demands on his time and his energy in order to spend some time in prayer. Even Jesus needed time for refreshment and renewal.


If Jesus needed that, we obviously need that as well.   After work, taking care of kids or other family members, running errands, paying the bills, all the stuff that we do, spend some time alone.  In silence.  Away from the noise.  Pray.  Reflect on what has been going on in your life and how God might be speaking to you through others.


So, regardless how you enter into the story, God will come to meet you where you are - Wherever you are in your thoughts, your fears, your doubts.