If you are like me, prayer is primarily a mental activity, and not a physical discipline. That was not the case for Christians of the Early Church, as the Lenten Prayer of St. Ephrem the Syrian (306 - 373 A.D.) indicates:

O Lord and Master of my life, keep from me the spirit of indifference and discouragement, lust of power and idle chatter. [prostration]

Instead, grant to me, Your servant, the spirit of wholeness of being, humble-mindedness, patience, and love. [prostration]

O Lord and King, grant me the grace to be aware of my sins and not to judge my brother; for You are blessed now and ever and forever. Amen. [prostration] 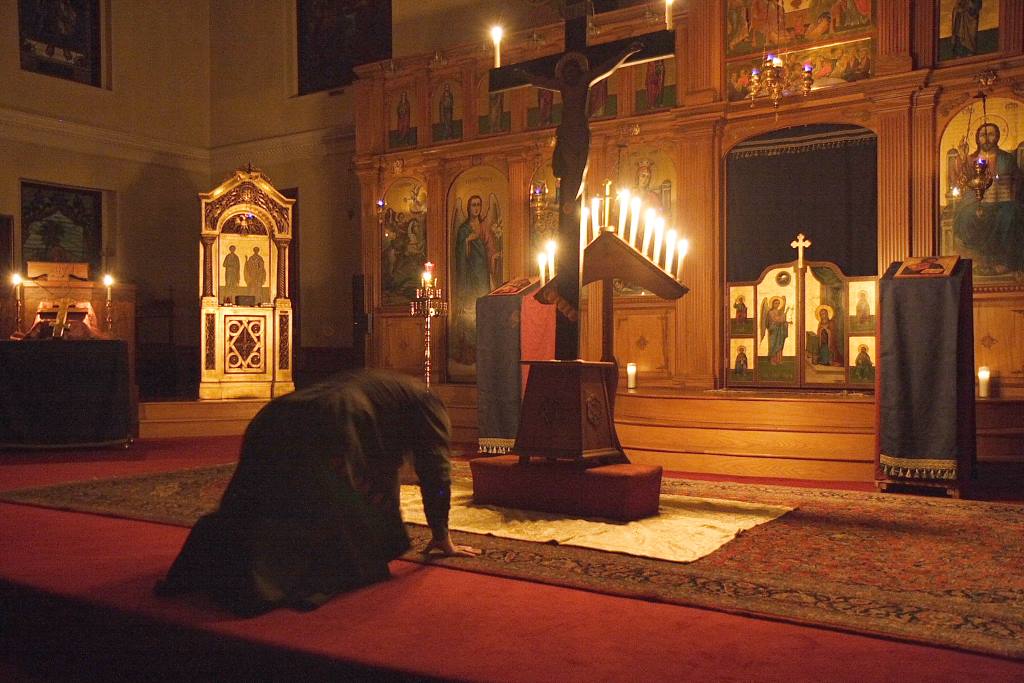 (The image is from http://morespaciousthantheheavens.blogspot.com/2010/06/prostrations-on-sunday.html)


Eastern Orthodox theologian Alexander Schmemann wrote a commentary on St. Ephrem's prayer, which concluded with these words on the importance of using our bodies, and not just our words, when we pray:

"After each petition of the prayer we make a prostration. Prostrations are not limited to the Prayer of St. Ephrem but constitute one of the distinctive characteristics of the entire lenten worship. Here, however, their meaning is disclosed best of all. In the long and difficult effort of spiritual recovery, the Church does not separate the soul from the body. The whole man has fallen away from God; the whole man is to be restored, the whole man is to return. The catastrophe of sin lies precisely in the victory of the flesh -- the animal, the irrational, the lust in us -- over the spiritual and the divine. But the body is glorious; the body is holy, so holy that God Himself "became flesh." Salvation and repentance then are not contempt for the body or neglect of it, but restoration of the body to its real function as the expression and the life of spirit, as the temple of the priceless human soul. Christian asceticism is a fight, not against but for the body. For this reason, the whole man - soul and body  - repents. The body participates in the prayer of the soul just as the soul prays through and in the body. Prostrations, the "psycho-somatic" sign of repentance and humility, of adoration and obedience, are thus the lenten rite par excellence."

(You can read all of Father Schmemann's reflection on St. Ephrem's prayer at: http://www.sv-luka.org/misionar/lentenpr_n2.htm)

I don't expect to overcome my reserved nature and do full-fledged prostrations all throughout Lent like Christians from the East do. Hopefully, though, my Lenten prayer discipline this year will include more of what is comfortable to me (and most Western Christians) during prayer - kneeling, making the sign of the cross, and lifting up my hands.  And who knows - maybe the Holy Spirit will knock me over into doing a prostration or two.