One of the gems of the Benedictine family are the Camaldolese monks - they live together in community, but retain a solitary lifestyle more reminiscent of the Desert Fathers and Mothers than a typical Benedictine monastery.   Along the beautiful California coastline near Big Sur is New Camaldoli Hermitage, home to a small number of resident Camaldolese monks and a thriving Oblate program (non-resident lay monastics). 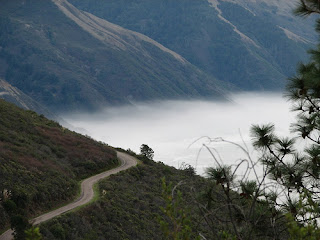 This past weekend, one of the resident monks of New Camaldoli, Father Bruno Barnhart, entered into eternal rest.  While his is not a household name, Barnhart has written some interesting books on the revival of the ancient wisdom tradition within Christianity. 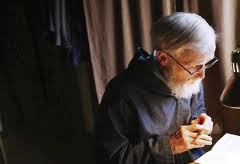 Barnhart's death coincided with the First Sunday of Advent, and the following passage from one of his books is appropriate for the season:

"Our temple, and all the temples, are gone forever from the world.  Now from within, from the center, the world itself is illumined as temple.... The music of the King sounds, beyond the ears' hearing, throughout this temple that is Christ.  The one Child, the Son, has come into his fullness at the center of the world, and the world that exists in him is now illumined and glorified in him." (From p, 208 of "Second Simplicity: The Inner Shape of Christianity").
Posted by Jay at 10:37 AM