The Church remembers St. Benedict each year on July 11, and it is important to remember that the Benedictine order is not the only group that follows the Rule of St. Benedict.  This past year, I've had the chance to visit two Trappist monasteries, New Melleray in Iowa, and Gethsemani in Kentucky. 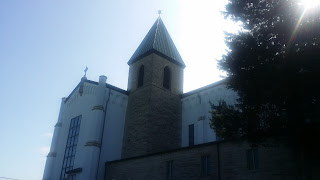 Trappists are formally known as the Order of Cistercians of the Strict Observance (OCSO) - the Cistercians are Benedictine reformers whose history dates back to the Eleventh Century, and the Trappists represent a reform group within the Cistercian tradition.  Despite their different charisms, each order continues to represent a faithful way of living according to the Rule of St. Benedict. The living reality of Benedictine life, as reflected in the Cistercian Order, was noted by a modern Trappist monk, Michael Casey, OCSO:

"The Cistercian Patrimony is not a matter of lifeless stones, but a living reality incarnate in the lives and labors of innumerable brothers and sisters and expressed explicitly by a substantial body of doctrine developed by Cistercian authors of all centuries.  We inherit from the past not only buildings and artifacts, not only a lifestyle that many romantically believe has changed little from the Middle Ages, but a tradition of life communicated in a thousand humble ways from one generation to the next.  Beneath the Cistercian reality lays a network of beliefs, values and core practices that embody the energy of the charism.  The heart of the Cistercian Patrimony is a philosophy of life as validly applied to the twenty-first century as to the twelfth"