Affirmation of Baptism and Turning to the East

Today, my son Jonathan affirmed his baptism through the rite traditionally known as confirmation. 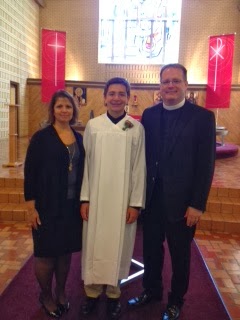 The answer my son gave to each one of those questions was "I renounce them".

In doing so, he also turned to the east.  Perhaps he did not do so literally from the perspective of geography, but in the minds of the Early Church Fathers, he turned toward the east after he renounced the devil, the powers of this world, and the ways of sin.  The following passage written by Gabriel Bunge, O.S.B., connects the baptismal rite with the ancient practice of facing the east when praying:

(Quoting Cyril of Jerusalem) 'When, therefore, you renounce Satan, utterly breaking all covenant with him, that ancient league with hell, there is opened to you the Paradise of God, which he planted toward the east, whence for his transgression our first father was exiled; and symbolic of this was your turning from the west toward the east, the place of light.'

The relation between the 'east' and Christ is so close in the mind of the Fathers that Ambrose in the same context, with regard to the newly baptized turning from the west toward the east, can simply say: 'Whoever renounces the devil turns toward Christ and looks at him directly.'

Whenever a Christian places himself in the presence of his Lord to pray, therefore - even if this is not always said explicitly or consciously adverted to - he renews with this turn toward the east that act of turning away from the evil one and of professing the triune God, which he performed once and for all in baptism."

(From the book, "Earthen Vessels: The Practice of Personal Prayer According to the Patristic Tradition" pp. 66-67).
Posted by Jay at 1:18 PM