In addition to hiking to the summit of Mount Washburn in Yellowstone National Park, our family had the opportunity to view several other natural landmarks during our family vacation to South Dakota and Wyoming.  During our visit to these places, I was reminded that long before the connection between Christian spirituality and mountains, Native Americans believed that mountains were sacred.

Devils Tower, Wyoming, was famously depicted in the movie "Close Encounters of the Third Kind" as landing pad for alien space ships, but for centuries, multiple tribes have believed that this unique geological formation is sacred. (All pictures were taken by my wife, Jenny, from her iPhone). 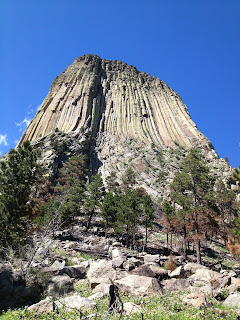 In central Wyoming, we encountered the snow capped Bighorn Mountains just before a powerful thunderstorm blew in from the plains. 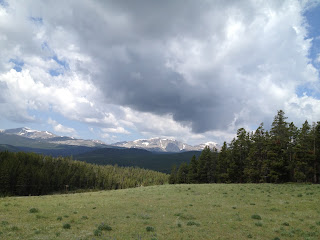 Archeological evidence has shown that tribes have used areas in the Bighorn Mountains (particularly the Medicine Wheel on Medicine Mountain) as a place for sacred ceremonies for over 7,000 years.   I wonder if Custer knew how much they cherished the area when he led the Seventh Cavalry of the U.S. Army into the region on his last mission.  In this picture of the monument on top of "Last Stand Hill" you can see a faint image of the Bighorn Mountains on the western horizon,  looming over the site of the Little Bighorn battlefield. 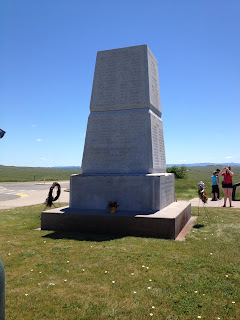 Finally, on our last day of vacation, we drove past Bear Butte, at the edge of the Black Hills near Sturgis, South Dakota. Referred to as Matho-Paha (Bear Mountain) by the Lakota, and Noaha-Vose (Giving Hill) by the Cheyenne, Bear Butte remains a place where members of many tribes make pilgrimages each year. 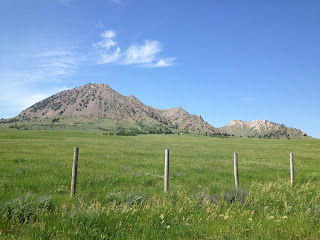 As a person whose ancestors came from Denmark and Great Britain, I have only a limited perspective on the importance of these mountains to Native Americans.  This vacation, though, will make me think of those mountains while praying Psalms like these during daily prayer:

"Let the floods clap their hands; let the hills sing together for joy" (Psalm 98:8).

"In his hand are the depths of the earth; the heights of the mountains are his also" (Psalm 95:4).

Unfortunately, many places that are sacred to Native Americans have been disturbed.  For example, the location of Bear Butte is immediately adjacent to the campground where the famous (infamous?) Sturgis motorcycle rally occurs each year, which makes for an interesting juxtaposition between the sacred and the profane.  Hopefully, in the future, our society will do a better job of respecting places that are considered to be holy ground.